Posted on Sep 13, 2017 by Profusion of Eccentricities 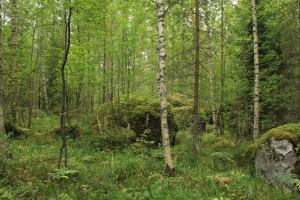 The first time I visited Finland the forest had been covered in snow.  This was not the light dusting that softens the edges of my home city on rare winter days, but a thick eiderdown, disguising shapes, hiding obstacles, obscuring paths.  The frozen lake was our playground; a trip out on to the ice to check the nets laid beneath, a whirl on the snowmobile or a slow, flat trek on skis across what, in the summer would be open water.  On land we stayed close to the cabin.  We kept away from the forest.

Returning in August I was keen to experience what I had been unable to before, to lose myself in the verdant heart of the island.  And lose myself I might.  Here paths appear and disappear, the terrain changes rapidly from bog to meadow to boulder field, the light, filtered through the dense canopy is muted and misleading.  It would be easy to imagine yourself the protagonist of a fairy tale, witch or wolf waiting in the wings, but the forest does not exude malice.  It is a home, a resource, a friend. 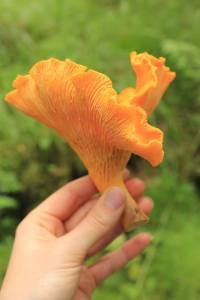 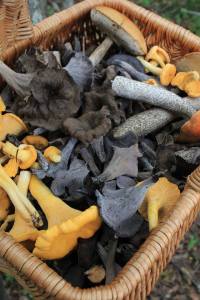 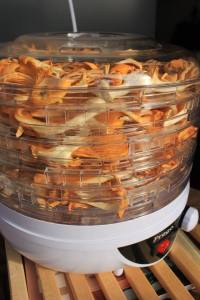 With the guidance of our host we learnt to see beyond the green, to spot the yellow, the black and the brown of fungi.  And once our eyes had adjusted our baskets quickly filled.  With supplies so plentiful we were able to dry some of our haul to take home, the forest still providing many days and many miles away.

After the mushrooms came berries, punnets of blueberries and lingonberries, staining our fingers and our faces with the evidence of abundance.  Made in to jam, cooked in to pastries, the forest’s fruits felt full of flavour compared to their supermarket kin even topping slightly burnt pancakes cooked on the campfire. 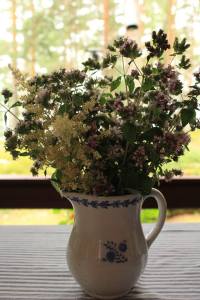 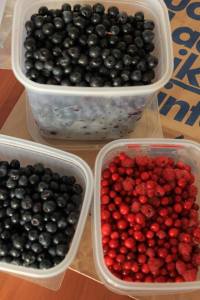 For all the bounty of the forest, the lake was not ignored.  The nets provided fish for the table more than once and I could not detect the muddiness sometimes found in those that inhabit freshwater. 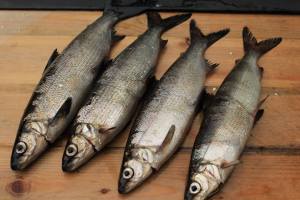 But perhaps the highlight were the crayfish.  These tasty little crustaceans are the centrepiece of the traditional rapujuhlat or crayfish party, held in homes across Finland and Sweden in late summer.  Pre prepared crayfish can be bought in supermarkets but we were lucky enough to catch our own.  They are cooked in a brine seasoned with dill, served simply with bread and washed down by copious amounts of schnapps to the accompaniment of drinking songs, a memorable experience, if perhaps a rather hazy one! 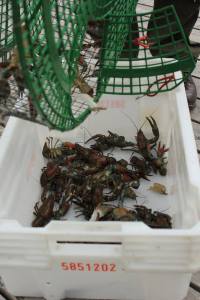 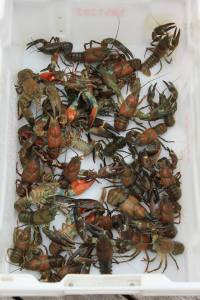