Posted on May 19, 2017 by Profusion of Eccentricities 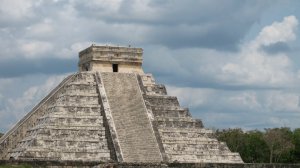 Two hours and hundreds of years away from the all-inclusive beach resorts of the eastern Yucatán lies the ruins of the Mayan city of Chichén Itzá.  At the heart of the complex, the pyramid of Kukulcan squats, brooding and massive.  It is named for the feathered serpent god (kin to the Aztec Quetzalcotal) who, during the Spring and Autumn equinoxes, casts his shadow on the temple’s monumental staircase, slowly edging and extending from the top of the platform to the ground.  The Spanish Conquistadors’, with a blunt literalism befitting them, named the structure El Castillo, the castle; an understandable title but one lacking in the magic and power of the original. 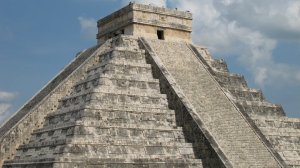 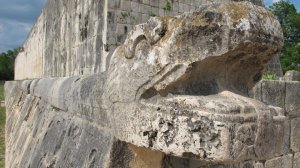 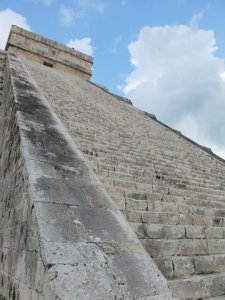 Kukulcan is one of the New Seven Wonders of the World but there is much more to Chichén Itzá than its central goliath.  The whole complex is a UNESCO World Heritage Site and large enough to spend more than one visit exploring. 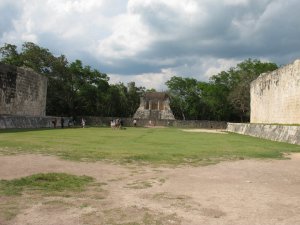 All is on a grand scale.  The photograph above is of the Great Ball Court where a variation of a ballgame, common in the region, was played by competing teams.  The rules are not known but the presence of stone hoops indicates an element of goal scoring.  It is believed that the sport was closely linked to ritual, with the captain of the winning team earning the honour of sacrifice to the gods, a theory supported by stone carvings of decapitation on the walls of the court. 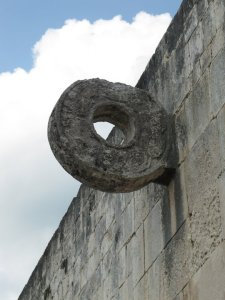 The macabre theme continues with the Platform of the Skulls, a carved representation of a tzompantli, a wooden rack used by both the Maya and the Aztecs to display the heads of sacrificial victims and those taken in war. 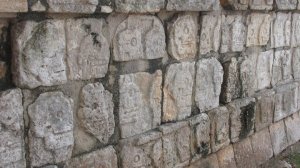 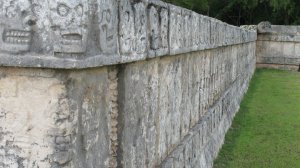 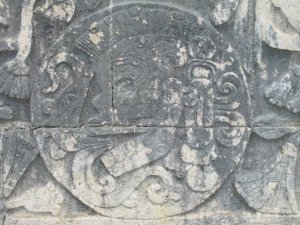 When life is hard and death is ever present, in childhood, in childbirth, in sickness and injury, in war, the end loses its fear.  We dream of a better place to come and sacrifice becomes logical.  Who wouldn’t want to hasten death when to do so is to bring forth peace and riches.

At Chichén Itzá there is a clear reverence, as in so many contemporary cultures, of nature.  It is the bringer of life and the bringer of death.  Animals are worshipped for the abilities they have that we desire, the flight of the eagle, the stealth of the jaguar, the strength of the snake, the freedom of them all. 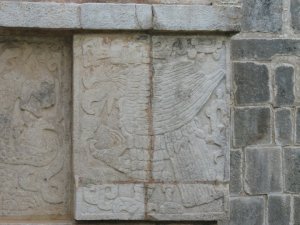 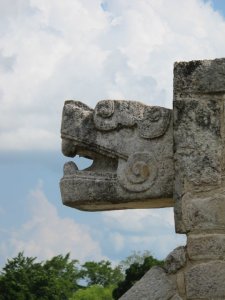 Representation of these animals can be found throughout the city, including on the Platform of the Eagles and the Jaguars, where they are depicted devouring human hearts and in the carved jaguar of the Jaguar Temple and its secret, red painted twin, hidden in the depths of Kukulcan and no longer visible by the general public. 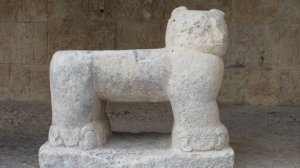 As well as looking to the earth, the Maya looked to the sky.  They mapped the movement of the stars, the passing of the seasons, the coming of the rain.  As well as the great pyramid, other buildings on the site reflect this relationship.  El Caracol, named by the Spanish for the snail they saw reflected in its roof, bears a remarkable resemblance to the domed observatories of modern science. 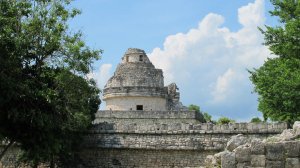 To watch the sky on this flat plane requires height, and El Caracol reaches above the trees to give unobstructed views and is aligned with the path of Venus and the summer solstice sunrise and winter solstice sunset, a feat not achieved by accident.

There are representations of the human here too.  Amongst them are a number of Chac Mool, a recurring image in Central and South America, a reclining, perhaps injured warrior on whose flattened stomach ritual bowls would once have rested. 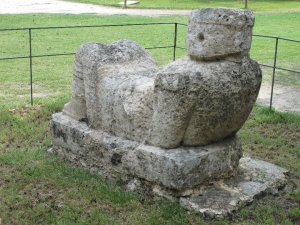 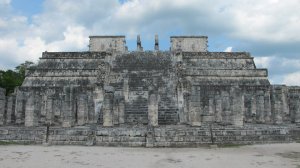 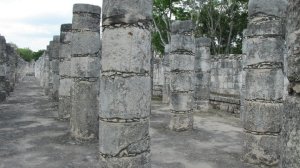 One of the largest Chac Mool lies at the top of the staircase on the four tiered Temple of Warriors, named for the bas-relief carvings on its platforms and columns.  In places paint and plaster have survived, a reminder that at one time the city would have been a vibrant, colourful place, very different from the sombre austere grey the years and the weather have left behind. 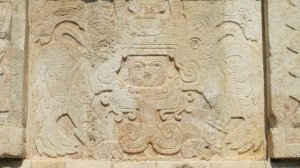 More faces look down from the walls of La Iglesia, or the church, highly decorated and part of a larger complex that archaeologists have identified as a place of government. 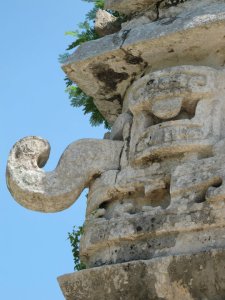 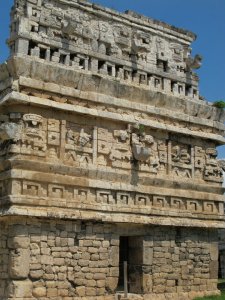 The scale of Chichen Itza is hard to absorb, each structure both intricate and monumental.  That one place can hold so many treasures is staggering and more than a little humbling.  Despite the heat, despite the crowds, a visit is highly recommended.