Posted on Feb 7, 2017 by Profusion of Eccentricities

The propensity for precipitation that brings snow to Vermont in the winter also brings rain in the summer.  On the eve of our last full day in the State the rain began and the weather forecast suggested that it would not stop.  We didn’t want to move on early just because we, and the tent, were a little wet (a massive understatement) and so we spent the evening planning the next day’s undercover activities.  Our immediate location, Smugglers’ Notch State Park and the town of Stowe, are heavily geared to the outdoors but we didn’t have to look too far afield for indoor options.  Just 20 minutes away on the outskirts of Waterbury is a Vermont institution, Ben and Jerry’s first factory where you can take a tour and learn about how the famous ice cream is made. 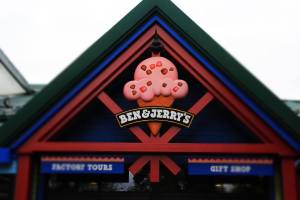 We were there before opening time, together with a small handful of other rain-weary travellers.  This meant that we were the first tour group of the day, about fifteen of us in total, significantly less than the crowds we saw queuing when we left.  The tour is quite short but includes a glimpse down on to the factory floor and a taste of a flavour not yet available to the public.  As well as the behind-the-scenes access there is the obligatory gift-shop and, of course, an ice-cream parlour.

The factory is decorated with some interesting advertising and memorabilia which you can browse before or after your tour and, for those brave enough to face the drizzle, you can take a walk to a quirky ‘grave yard’ to discontinued flavours, certainly enough to while away an hour or two. 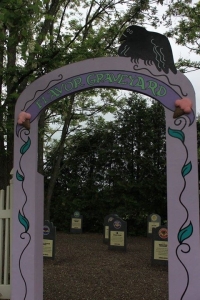 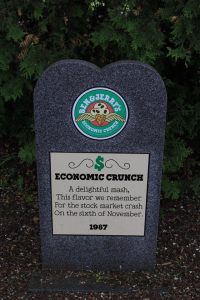 Ice-cream consumed and still many damp hours to fill we drove on, thirty five minutes west to Burlington, a university town on the shores of Lake Champlain.  Burlington had been recommended to me by a friend who lives in New England and it didn’t disappoint with plenty of street art to photograph and interesting shops to nose in, including Outdoor Gear Exchange, a vast emporium of all things outdoors, including a well stocked pre-loved section.

Also on the agenda was ECHO Lake Aquarium and Science Centre, primarily aimed at children, four class loads of which were just leaving as we arrived, but still entertaining for two adult tourists interested to learn more about the local area.  It is well laid out with a good balance between aquarium exhibits, interactive displays and educational videos.  Here we were introduced to the legend (or should that be the reality) of Champ, Lake Champlain’s very own version of the Loch Ness monster recorded sightings of which stretch back more than two hundred years.  The water of the Lake was too choppy and the sky to grey for us to add to the tally.  ECHO has regular temporary exhibits and, to my delight, our visit coincided with one dedicated to Smokey Bear, the US Forest Service’s fire prevention mascot.

I had become a little obsessed with Smokey during our travels as he often appeared at the campsites where we were staying or at the side of the road in wooded areas in shiny official signs and cut outs and also in home-made, rather more rustic versions tacked to the ends of private roads or outside local fire stations.  Sadly all the Smokey clothing on sale in ECHO’s gift-shop was designed for children but I was able to pick up, for the princely sum of $3.99, a large silk handkerchief printed with the image of a forest fire, Smokey’s disappointed face appearing like a spectre from the smoke; an ideal souvenir as it took up no room at all in our luggage and was easy to frame as an unusual piece of art back home.

After ECHO we headed in to town for an afternoon snack, choosing ‘Top of the Block’ sandwich shop at the far end of the pedestrianised Church Street. Here I had a near spiritual bread and meats revelation, with my first ever experience of a Reubens. For the uninitiated a Reubens consists of corned beef (not of the terrible British sort), melted swiss cheese and coleslaw or sauerkraut on rye bread. It was, without doubt, the best sandwich I have ever eaten and brought yet another ray of sunshine to brighten our rainy day.

What do you do on rainy days when you’re travelling?