Posted on Jun 17, 2016 by Profusion of Eccentricities

The second full day of our trip happened to fall on our wedding anniversary, so we thought it fitting to spend most of it exploring what is known as Iceland’s Golden Circle.

We had camped the previous night at Leirar, one of þingvellir National Park’s campsites and, waking early, were able to make it to the visitors’ centre, a ten minute drive away, before 9am when you have to pay to park.  This meant that the centre itself was closed but the main attraction is outdoors.  The centre sits on a rise above the plain where the Alþing, Iceland’s general assembly, met from 930AD until 1798AD, and where, before mass literary, laws were read out from the Lögberg, or Law Rock. 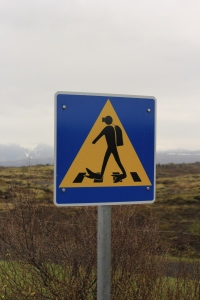 The area also happens to be the site of the Almannagjá fault, the meeting point between the American and European tectonic plates, and it is possible to walk through the crack in their midst, one foot on each continent.  Those brave enough to face the clear but icy waters of nearby Silfra can continue to follow the fault with dive gear or a snorkel.

Having explored Þingvellir we set off for the next stop on the circle, Geysir, the hot water-spout after which all others are named.  Geysir itself is no longer regularly active but others, including neighbouring Strokkur, are with a tell-tale recession in the pool’s water indicating when an eruption is imminent.  The geothermal park is free to enter, with a pot for donations next to the main road.  Parking is also free in front of a large gift shop and restaurant complex.  Access is easy with a slowly sloping path and there are even benches to sit on should you need to wait a little while to witness a spout.  We were lucky, Strokkur displayed twice in less than ten minutes shortly after we arrived. 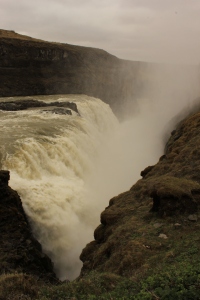 After Geysir comes Gullfoss, a wide, double-drop waterfall which plunges in to a narrow canyon.  A path follows the river right to the top of the falls where you can physically feel the power of the water as it thunders over the edge, clouds of spray billowing in to the air.  The day had started cloudy but the skies were slowly beginning to clear and anticipation, mixed with the magic of the falls, filled us with excitement as we sat in the car-park, eating a lunch of pot noodles cooked on our camping stove and planning what was to come next.